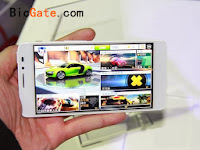 TCL Moible Phone launched the first eight-core phone TCLidol X+ at the beginning of the conference on December 26, due to the overall competitiveness of the domestic good TCL idol X get hot, many users naturally more concerned about the second-generation products. Shortly before the aircraft to S960/S960T internal model network, leaked 2GHz machine may use a high-frequency MT6592 true eight-core processor, there are already suspected TCL idol X+ system information and run sub-exposure.


Although not explicitly expressed in the run points from TCL idol X+, but from the processor frequency up to 2002MHz, the likelihood is idol X+, and now known to adopt the new machine a handful of high-frequency MT6592, as one of the partners MediaTek depth, TCL first to receive high-frequency version of the first reason. In addition, such as memory, camera and resolution information is also consistent with the gossip.

The exposure of the run of shows that have a high frequency of 2GHz idol X+ security Bunny composite score up to 33,111 points, while we are seeing run of eight-core 1.7GHz remain at 26,000 points down, and the machine to run sub-also leapfrogged MediaTek official version of the high-frequency performance than TCL Hero N3 done a lot of optimization, of course, performance is more worth the wait.