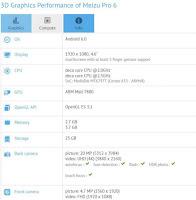 Although it was largely absent from MWC 2016, Meizu might be preparing something just as special and head-turning. The Meizu Pro 6, its next flagship, has yet to take flesh, but, at least according to leaked images and the company's own press event, it will put up quite a show. In addition to curved screen edges on all four sides, the high end Chinese smartphone will be sporting MediaTek's most powerful deca-core processor to date, a fact confirmed by a sighting on the GFXBench website.

A leak earlier from this morning described how the Meizu Mobile would be the first smartphone to come powered by MediaTek's Helio X25 processor, pumping out power from an unheard of (in smartphones at least) 10-core setup. The latest leak, which contains a screenshot image of 3D graphics benchmark test results from over at GFXBench, shows that the Meizu Pro 6 may indeed be equipped with the deca-core Helio X25 Processor. Other details from this morning's leak, like the amount of RAM, weren't revealed but the benchmark leak seems to give off those details, stating 2.7GB and 3.7GB of RAM, suggesting that there may be two models of the phone, one which comes with 3GB of RAM and one with 4GB of RAM for those who may want to have more, or it could just be 4GB of RAM in a single model only.

The Meizu Pro 6 is expected to also have 4 GB of RAM and 32 GB of storage, also confirmed by this GFXBench listing. Interestingly, the stats on the page show a 4.7-inch 1080p screen, which could simply be a test board of some sort. The smartphone is, in fact, leaked to have a 5.7-inch QHD display that curves on the left, right, top, and bottom sides of the device. Whether that last bit is actually accurate or more like wishful thinking, we'll have to wait for the Pro 6 and Meizu MX6 real device to show up.
Source: GizOK
时间： 三月 22, 2016