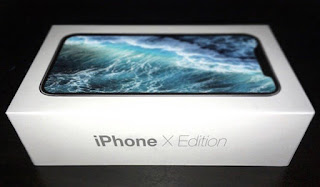 Finally seeing a picture of the iPhone 8 retail box may be good news for some iPhone fans, a sign that Apple is indeed going to release the phone at some point in September, instead of delaying its launch. But it’s likely a fake, and it’s so bad it’s hilarious.


iPhone picture on the purported “iPhone X Edition” box shows one detail that seems to be out of place. The standby/power button on the right side appears to have the same size you’d expect from older iPhones or iPads. But the iPhone 8 — or whatever Apple ends up calling it — will reportedly feature a taller standby button.

Also, why is that picture so out of focus? Why don’t we have a close up of the phone on it? After all, Chen went through all the trouble of posting additional images, showing the “iPhone X Edition” logo, and that purported wallpaper — you can see them above and below. But no close up on the one thing we want to see most?

What’s certain about the iPhone 8’s retail box is that it doesn’t have a pattern to follow. Starting with the iPhone 6, Apple created a bunch of unique retail boxes for each handset generation. Some of them showed the handset with the screen turned on (iPhone 6s), others showed the rear side of the phone (iPhone 7), or just an outline on top (iPhone 6). And only the iPhone 6s had the full name printed on the side. Oh, and there’s pretty much no way the full name of Apple’s upcoming new flagship iPhone is going to be “iPhone X Edition.”