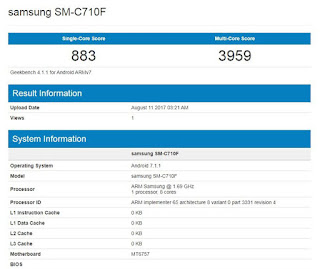 One of Samsung's upcoming smartphones, rumoured to be the Galaxy C7, has been allegedly spotted on Geekbench. The leak was discovered by Slashleaks


Now, the Galaxy C7 has again hit the headlines while the smartphone industry is waiting to witness the unveiled of the company's flagship Galaxy Note 8 on August 23. According to Slashleaks, the Galaxy C7 was just spotted visiting the Geekbench benchmark listing giving us an idea of what it will feature internally.

As an alleged benchmark of the Galaxy C7 just popped up, giving us a sneak peek at its insides. It looks like Samsung will be relying on MediaTek's Helio P20 (MT6757) chipset. Additionally, the leaked benchmark results reveal 4GB of RAM on deck. Oh, and Android 7.1.1 is on board,