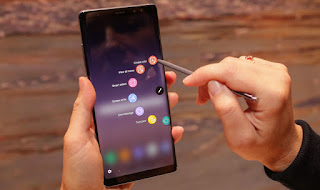 With the release of the Samsung Galaxy Note 8, Samsung attempts to put the pieces back together and reassure those willing to spend a lot of money on a phone that they can safely do so with Samsung.


Cupertino will have likely looked at the Note 8 and noted that its price allows any potential "iPhone 8" pricing – I'll bet you $999 that the so-called iPhone 8 will start at $999.

As Barron's reports, Mark Moskowitz of Barclays believes the Note 8 will make it harder for Apple at the top end. Especially as he insists that many consumers will turn away from high pricing and gravitate toward what he calls the "midrange" segment.

But the fair-weather Mayweather to his maudlin McGregor is Drexel Hamilton's Brian White. His view is that the Note 8 is lovely and all that, but that "we believe consumers are eagerly awaiting the 5.8-inch iPhone 8 this fall, and we believe Apple's stock has healthy upside potential."

Indeed, a piece of research that came out on Friday -- from marketing platform Fluent -- offers a sobering picture of the challenge facing Samsung and other phone brands. Seventy percent of iPhone buyers said they wouldn't even consider another brand for their next phone.

Oh, the vast majority carped on about $1,000 being too expensive for a phone. But more than 40 percent still said they'd buy it.

For Samsung, one enormous challenge, then, is to capture consumers early and wrap them into an ecosystem from which they become increasingly reluctant to leave. But that's more difficult when you don't have your own operating system. The Note 8, for example, offers two different assistants -- Google's and Samsung's own Bixby.