Don't Waste Your Money on the New iPhones 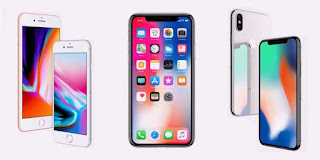 After much anticipation, Apple finally announced its latest models earlier this week: the iPhone 8, iPhone 8 Plus and the iPhone X. The new iterations promise some pretty sweet features like wireless charging, better cameras and an all-glass design with a 5.8-inch Super Retina display and facial recognition software specifically on the X. It also comes with a pretty hefty price tag. The new iPhone X will start at $999 and the iPhone 8 and 8 Plus will start around $699 and $799 respectively. There have a few things you should consider before going to buy it.


1. The features aren't anything revolutionary to the premium smartphone world.
Facial recognition, screen to screen glass and wireless charging are new features for the iPhone family, but other smartphones like the Samsung Galaxy S8 have already introduced variants of these in their models and are available for less (in some cases a few hundred less). One caveat that Rachel Rothman, Chief Technologist of the Good Housekeeping Institute says to keep in mind: While Apple usually isn't the first to market new features, their technology usually is refined and performs intuitively and elegantly, but many of the cool new features will be available just by updating your current software.

2. It's likely going to have a few bugs.
Along with the new phone, Apple is also rolling out a heavily upgraded iOS 12 which introduces the capabilities for a split screen view, a QuickType keyboard, a blown out augmented reality platform, Apple Pay over iMessage, new camera filters and more. For iPhone X specifically, iOS 12 will introduce 12 Animojis, which let you send moveable emojis that match your facial expressions. But every new overhaul to an OS usually comes with a handful of kinks that need to be worked out. "Our general recommendation is to wait until the first update happens after such an upgraded OS to avoid initial issues," explains Rothman.

3. Facial recognition isn't really making your life easier.
Yes, we have to admit that being able to unlock your phone with a look is pretty cool, and Apple's facial recognition feature adds an extra layer of security by analyzing more than 30,000 invisible dots to create a super-accurate depth map of your face. From a functional standpoint though, the feature isn't making your life any faster or easier. It's still just as quick as using your finger print to access your locked phone.

So, who should buy the new iPhones?
For the ultimate tech-y, the iPhone X is the new top of class whose new specs are sure to wow. But like we mentioned, it'll cost you. For the average phone users, the new additions won't be game changing enough to justify spending the money. "Great features solve problems that consumers know they have and the new iPhone just isn't doing that," explains Rothman. "There are no new specs that will vastly improve your life so much so that spending $1,000 is absolutely necessary." Instead, she recommends checking out the iPhone 7 or 8 if you are in the market for a new phone. "If you haven't upgraded in awhile, it'll be an improvement for you at a fraction of the cost."