Everyone's waiting for the iPhone X, it is a bad news for Apple 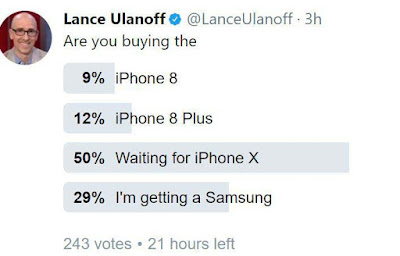 Today’s retail launch of the Apple iPhone 8 and iPhone 8 Plus is a crucial test for Apple's riskiest iPhone strategy.

This strategy of offering the iPhone 8 and 8 Plus first, while the real update, one that some believe is prohibitively expensive, looms just a few weeks later, is an unusual choice. In fact, it could squeeze Apple from both sides. iPhone consumers usually want the shiniest, new thing, but they don't want to pay an arm and a leg (The argument could be made they they've been doing so for ages, but the loss of carrier subsidies and the psychographic impact of a $1,000 price should not be underestimated).


If they bought the iPhone 7 last year, are they planning on buying the iPhone 8? Probably not. It certainly wasn’t my recommendation. So that means they wait for the iPhone X.

Yes, but what does the Apple’s first quarter look like if demand for the iPhone 8 and iPhone 8 Plus is low (we have yet to hear about pre-sale numbers, but there have been zero reports of delivery delays on pre-sales, a possible sign of soft demand) and tens of millions of customers wait for iPhone X in 2018?

Things could still work out in Apple’s favor, especially if they just collect all the pre-orders for the iPhone X, put those sales on the 2017 Q1 books and then let people wait for delivery until next year when they can make enough of the 5.8-inch handsets.

Alternatively, Apple could benefit from the unusually high number of upgraders ready to buy new phones. Samsung told me earlier this year that some 50 million consumers were at the end of the 18-month smartphone ownership cycle. They hope to sweep a lot of them up in the Galaxy S8/ Galaxy S8 Plus and Note 8 launches. But they’re up for grabs for Apple, too, which could sell them any one of eight different iPhones.

I’m confident Apple will sell millions of new iPhones, but if most them end up being the iPhone X, the question of when those sales happen starts to look really murky. Will they still be meaningful if many happen after the Samsung Galaxy S9 and Samsung Galaxy Note 9 is a reality? Or iPhone 9, iPhone 11/iPhone X2 rumors start to mount?