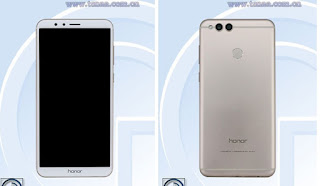 There is no exaggeration that now we are living in the full screen age that it is so popular that many phones have equipped with this design, and the most outstanding is the brand of the Huawei that according to the news come from the Gizok that it will release its another flagship—Huawei Honor V10 that equipped with the popular full screen design.

According to the news leaked before that the Honor V10 not only will equip with the design of the full screen, but also feature with Kirin 970 processor that is the same as the Huawei Mate 10, whose performance will be really excellent.

As we all know that this new processor is the world's first one that built-in standalone NPU smartphone AI computing platform. In handling the same AI application tasks, Kirin 970 new heterogeneous computing architecture has about 50 times the energy efficiency and 25 times the performance advantage than the others like the phone of the Huawei Nova 3.

Comparing to the other phones that the phone with the Kirin 970 processor that the response will much quicker and will give the customers a unique using experience. As another representative flagship of the Huawei P11 that is said also to be equip with this new generation processor, do you like it?