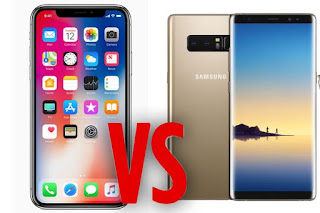 The Taiwanese film estimated that Apple will grab 19.1 percent market share in the coming months, up from 11.5 percent in the third quarter. Apple’s release of the iPhone X, together with widespread availability of the iPhone 8, iPhone 8 Plus and discounted iPhone SE, is expected to play a key role in helping Apple to dethrone Samsung during the all-important holiday shopping season.


“Samsung is expected to slightly scale back the production of its high-end models in the fourth quarter as the brand is seeing the sales of its smartphones being squeezed by the strong demand for Apple's latest iPhone devices,” the market research firm said. “TrendForce estimates that Samsung's fourth-quarter total volume will come to 77 million units, a 5 percent drop from the third quarter.”

After Apple and Samsung, Chinese companies Huawei, OPPO and Xiaomi are predicted to be the largest smartphone players in the fourth quarter. In the first three quarters of the year, Samsung, boosted by its own smartphone launches, comfortably beat Apple for market share. When the South Korean giant releases the new Galaxy S9 in early 2018, the balance could once again be tipped back in Samsung’s favor.

Data from Canalys found that older smartphones were the bestsellers in the third quarter. According to the market research firm, Apple’s iPhone 7 shipped 13 million units in the period. In second place was the iPhone 6s with 7.9 million shipments, closely followed by Samsung’s Galaxy J2 Prime with 7.8 million shipments.