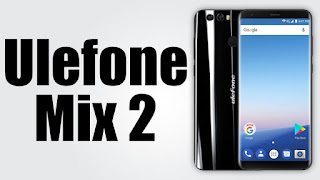 Ulefone is a mobile phone brand that is not as famous as the Xiaomi and Huawei, however, it has released several models that are very popular among the customers such as the phone of the Ulefone Armor 2, which is a three-anti phone that not only with the excellent performance in water, but also in the environment that the temperature is very high.


Another model that has earned many people’s attention is the Ulefone Mix 2, which with the similar name of the Xiaomi Mi MIX 2 that many customers think that it is the clone of the Mi MIX 2. The different from this phone is that it is equipped with a lower memory combination compared to the last generation.

As the next generation, many phones have improved on the basis of the last generation, however, compared to the Ulefone MIX that the memory combination of the Ulefone Mix 2 is a much smaller, which will makes the customers a little unsatisfied with it, although it is equipped with the most popular full screen design.

How about the other information? It is equipped with MT6737 Octa Core processor with 2GB RAM +16GB ROM that the speed can not reach to the Ulefone Power 3, but the speed can meet the normal usage for it with an affordable price. Waiting for its’ enough supply.