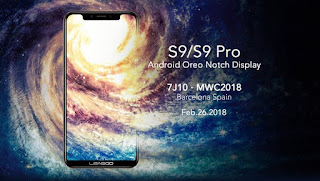 The Leagoo S9, on display at Barcelona’s Mobile World Congress on Monday, appears to have a fair few design flairs in common with the iPhone X that launched last November. At just $150, this Android smartphone comes in at a fraction of the price of the $999 Apple flagship.

The phone falls under Leagoo’s “Real Power” branding, which touts 35 percent more battery life than regular phones. In its explainer of the feature, Leagoo says the company uses solutions like a highly-optimized operating system that boosts multitasking efficiency by 25 percent, as well as an image processor that reduces the power needed for taking photos. In the case of the Leagoo S9 Pro, the phone packs a 3,300 mAh battery, notably larger than the X’s 2,716 mAh pack.

From the looks of it, an iPhone X clone can't get much better than that. The only thing that left us bewildered is the phone's name. Why the Samsung Galaxy S9 reference? Was the Leagoo X model name already taken?