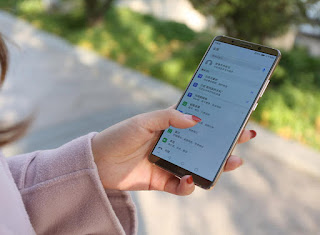 The flagship of the Huawei Mate 10 was released last year with the popular full screen design that has earned a high reputation before its release for its excellent performance. Recently, there is exciting news leaked on the internet that the Huawei Mate 10 support update to the EMUI 8.0 system, which add the new function of the face wake.


Except the function said above, there are also several new functions applied on the system that have not appeared in the other phones such as the Huawei Honor V10 and the Huawei Nova 2s, including raise your hand to brighten the screen, bright screen directly unlock/slide the screen to unlock, smart display lock screen notification and other user-friendly features.

In addition, this upgrade is still an open beta that the users who have not received the push can apply directly through membership services that will be the same as the phone of the Huawei Honor 10. The method is as follows: "Member Services - Fast Service (More) - Other - Version Request", download firmware to complete the upgrade.

After the upgrade, the "Face Recognition" option can be seen in the "Settings - Security and Privacy Menu" of the mobile phone. Before entering the face data, the system will ask for the lock screen password (digital, pattern or hybrid password). The purpose is to protect the face data twice that when the face unlock fails 5 times, the system will force the use of the password to unlock that will bring the users a higher security protect, which is said to be also applied on the new machine of the Huawei P20.

Last but not least, the function of the“smart display lock screen notification” will protect your private that even if other people light up the screen, the detailed caller number and short message digest will not be displayed on the lock screen interface, but will be displayed in the “hidden” mode that let the owner “exclusively” belong to his privacy space, which has raised many praises with the help of the Kirin 970 while the Huawei Nova 3 is said to equip with the Kirin 670 processor.