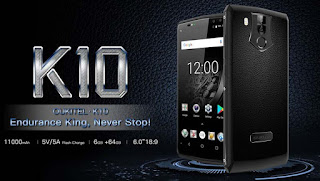 Now what the feature of producing mobile is that the screen is more and more bigger, and as the battery technology has not improved to solve the long time problem that the most effective way is to increase the capacity of battery to meet the high demand of long power time that the model of the OUKITEL K10 with 11000mAh battery was appeared.


At past, it is impossible for us to image that a phone with such big battery, but now the Oukitel has made it come true that it is very easy and convenient for us in daily life that we do not need to charge it for several times, and according to the information on the internet that it can standby about 42 days that it can support several days at least for normal usage while the phone of the OUKITEL K6 is just with 6300mAh battery.

As for the detail configuration, it is equipped with a 6.0 inch screen with the 2160 * 1080 Pixels resolution that is the same as the OUKITEL MIX 2 while it is featured with a 5.99 inch screen that both of them with the popular 18:9 full screen design, which makes the model more beautiful and charming.

What increase its selling point is that it not only supports the function of face wake that has not applied on the phone of the OUKITEL K8000, but also it supports the function of NFC that we can use it to go shopping and take bus while the other model like the OUKITEL WP5000 without this function, which will bring much convenience in our daily life.