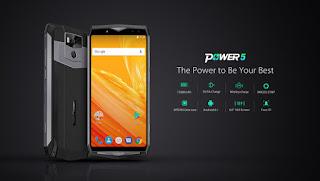 The Ulefone Power 5 is Ulefone's new battery monster. The device gets its running juice from a nigh-unparalleled 13000 mAh battery. It also features quad cameras, wireless charging, OIS, and a slew of features you wouldn't expect to find on a device that could very well power a house.


The main advantage of this Ulefone smartphone is the large battery capacity of 13000 mAh, which can provide up to 7 days with a single charge. In addition, the battery supports quick charging, 5V/5A, which allows to charge the battery in just 2.5 hours. The smartphone Ulefone Power 5 can be charged from wireless charging 10 watts.

Ulefone T2 Pro and Power 5 features a 6-inch FHD+ display, 6 GB of RAM, and 64 GB of storage. Camera-wise, it is said to sport a dual rear camera setup (Sony IMX230 21 MP + 5 MP Sony sensors), and a dual selfie camera lineup (13 MP + 5 MP). The rear cameras have Optical Image Stabilization. Other features include a side-mounted fingerprint sensor, a shortcut button, and face unlock. It will also run on Android 8.1 Oreo out of the box, which brings Treble support and all the tasty software customizability that comes with it.

The Ulefone Power 5 and Ulefone X will go on pre-order starting April 24. Its price is not yet disclosed. Pre-ordering will grant buyers the gift of free wireless chargers and US$70 coupons.