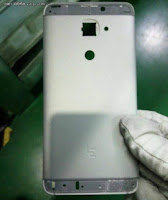 Only two days ago we got a glimpse at the upcoming LeEco Le 2 smartphone, through some leaked images showing it. Back then we found out a couple of its most important specs, and today thanks to a new leak we get a more complete list.

LeEco is the Chinese company formerly known as LeTV, which grabbed the international spotlight when it was the first to release a device powered by Qualcomm's Snapdragon 820.

The front of the alleged LeEco Le 2 shows off a design that is very similar to the currently available Le 1s. The screen to body ratio is again identical to the 1s and the same can be said about the placement of the sensors, the receiver, the front facing camera and the capacitive buttons at the bottom. On the back we again have a set up similar to the Le 1s, but this time with a squared camera module that protrudes quite a bit from the rest of the back. The rest of the back remains flat, with a textured surface that is visible under the glass back. Also visible is the squared out fingerprint reader as well.