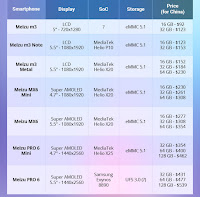 Expecting at least 3 new devices from an OEM for a year is probably the norm for most. But what if they wanted to release 7? Realistically and financially, that might be too far fetched but if a leaked document is to be believed, that is exactly what Chinese tech brand Meizu mobile is planning to do this 2016. While some of those on the list are expected already, what with previous teases and rumors, some of them are a surprise.

What we do know is that there will be two press events by Meizu next month, and what most are assuming is that it will be to announce the Meizu M3 Note and either the Meizu MX6 or the PRO 6 (or both). The PRO 5 was supposed to be released earlier but then the OEM cancelled it for some reason. So it's highly unlikely that they will launch a PRO 6, although we've been seeing sightings of it in AnTuTu, Geekbench, and GFXBench which are the “usual suspects” for devices coming out in the market soon.

The leaked table shows that these are the handsets that Meizu is planning to release this year: Meizu M3, Meizu M3 Note, Metal 2, MX6 Mini, MX6, PRO 6 Mini and PRO 6. As stated earlier, the PRO 6 is still a big question mark, and the document states that it will be powered by the Exynos 8890 SoC. However, Meizu earlier said that the MediaTek's Helio X25 processor will be the one fueling the upcoming smartphone. That may call into question the veracity of this leaked info.

Time will tell of course if any of this information is true. In the meantime, we have to wait for the two press events that will happen next month and if any of these devices in the list will be the ones introduced by Meizu.
Source: POMP Mall
时间： 三月 24, 2016