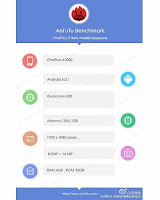 The OnePlus 3 is set to launch in the second quarter of 2016, but we may already know what to expect from the company's next flagship phone. A leaked AnTuTu benchmark reveals the specs for what's shaping up to be a pretty awesome device.

According to the benchmark listing, the OnePlus 3 comes with the model number OnePlus A3000 and features a Qualcomm Snapdragon 820 SoC; Adreno 530; 4GB of RAM; 16-megapixel rear camera; 8-megapixel front camera, and runs Android 6.0.1 Marshmallow. The smartphone is said to sport 32GB built-in storage and come with a screen resolution of 1080x1920 pixels. The benchmark listing suggests that OnePlus may skip a QHD display in its OnePlus 3 flagship smartphone. To recall, the OnePlus 2 launched last year and featured a full-HD (1080x1920 pixels) screen, and was marketed as '2016 flagship killer'. The details were shared on Weibo and first picked up by Android Community.

Presuming OnePlus sticks to their model of high-end specs at affordable prices, the OnePlus 3 will be in line with this year's flagship devices, even if it is released 3 months from now. In the interview, Pei noted how the OnePlus 2 had a lackluster design and that their upcoming device will try to capture the excitement around the original device. In our own Cam's opinion, the company would do well by taking more design cues from their lower-end OnePlus X.

The GizOK website also says OnePlus mobile plans to unveil the device during a special media event in Beijing on April 7th, although there's a good chance that it won't come to the United States until much later.
Source: GizOK
时间： 三月 25, 2016