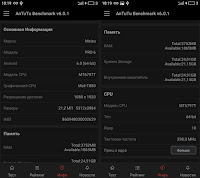 With just a couple of days to go for its official unveiling, the Meizu Pro 6 has yet again been leaked in all its glory. This time around, we have some new images to look at, and we also get a sense of the processing prowess of the upcoming device thanks to screenshots of the AnTuTu benchmark results page that shows the device scoring 91,165 points on the world’s most widely-used synthetic benchmarking app for Android devices.