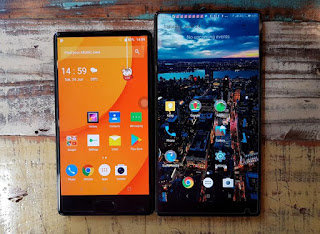 I got my hands on the Doogee Mix today, and yes, it is undoubtedly inspired by Xiaomi's (still) stunning phone, but there are a few pleasant (and one really weird) surprise.


First off, the Doogee Mix is more comfortable in the hand than the Xiaomi Mi Mix. Most of this is due to the smaller display size -- a 5.5-inch 1080p panel, as opposed to the 6.3-inch on Xiaomi's device. Even though the lack of bezels gave the Mi Mix a much smaller footprint than any other 6-inch device before it, it was still a bit unwieldy. The Doogee Mix is much more manageable to hold. It also helps that Doogee gave its device more a curve on the sides, whereas the Mi Mix was mostly a rectangle block.

Another deviation by Doogee is it did not eliminate the earpiece and proximity sensor from the phone's top. Xiaomi's Mi Mix really turned heads at last fall's launch event because it removed those two long-standing phone features (instead, the Mi Mix vibrated sound to your ear through its metal frames and used a sonar-type tech to determine proximity) in order to shave the top bezel to virtually nothing. On Doogee's mix, both components are still up there, which means the phone actually has a top bezel, just really, really slim. It's actually quite impressive for such a small company to pull off this feat of engineering. I tried a call and the sound came through loud and clear too.

It's hard to see but there is actually an earpiece and proximity sensor there.
That explains why the Doogee Mix is slightly less "bezel-less" than Xiaomi's Mix. Putting the two phones side by side with screen turned on, it's clear Doogee's phone has wider black bars wrapped around the display, as you can see in the main photo at the top of the piece. Another change up front is Doogee has its fingerprint reader on the front, whereas the Mi Mix had it on the back.

Moving to the back of the device, the Doogee Mix has two cameras (because every phone has to go that route now... I almost want to command Samsung for not doing that with the S8). Here, the 16-megapixel+8-megapixel set-up does all the usual two camera tricks. It can produce "bokeh" shots and also offer 2x zoom (like the iPhone 7 Plus and the OnePlus 5). I took some quick sample shots and the results are okay. I doubt this camera will blow anyone away. I'll go into more details during my review to be published in a week or so.