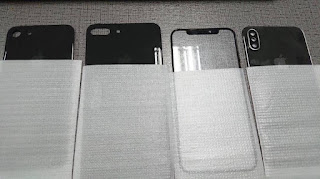 Apple’s iPhone 8 has been the talk of the web since launching its iPhone 7 model last September – a handset that was deemed far from a home run.


Also shown in the image of the 'iPhone 8' is an area at the top that appears to house the front-facing camera, microphone and senors - a longstanding speculation.

Alongside it are backs for an incrementally upgraded iPhone 7S and iPhone 7S Plus which show both phones will also switch from an aluminium chassis to glass, which kamikasky says is in order to bring wireless charging. It had been thought this long awaited feature would be an iPhone 8 exclusive.

As always caution is important and until Tim Cook is standing with these new iPhones in his hand doubt will remain. Then again leaks have revealed the finer details of every new iPhone for generations and consistency has clearly built around the iPhone 8 Plus.