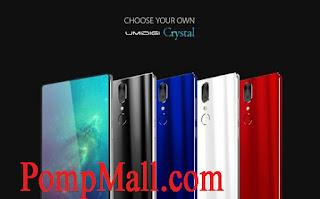 Recently, many of the the mobile phone companies focus on overseas business has announced its own full screen new machine, the official replacement of the brand called UMIDIGI mobile phone has recently officially opened to the outside world of their own new phone, which belongs to the Crystal series called UMIDIGI Crystal, and there are a variety of products available for users to choose.


According to the news from Pompmall that it uses a full-screen design with amazing ultra-narrow borders like the phone of UMIDIGI Crystal Plus. It has blue, black, red wine, silver four colors for others to choose. Although the machine is to see like the most of the full-screen mobile phone as the left and right sides of the very narrow frame design, but without the screen design fingerprints in the bottom, so the space below the screen looked narrower than other phones like UMi Z Pro and UMi C Note, while the back also with the microstrip arc mirror treatment.

As for the configuration, it with Helio X25 Deca Core processor, builds in 4GB RAM + 64GB ROM that is a little bigger than UMI Z,with 5.5 Inch 1920 x 1080 pixels FHD screen, installed Android 6.0 OS, promises quite a fast operation speed.