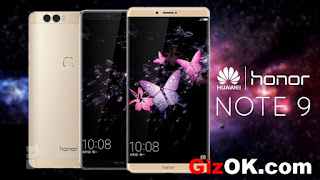 
Honor Note 9 may use 6.6 inch big screen that the ratio will up to 18:9. The up and lower border is very narrow that only remain the handset and the logo on the front side. It equipped with 8+13 MP camera that the quality of the picture will be excellent as Huawei Mate 10 while it equipped with 20+12MP camera combination.
Configuration, Honor Note 9 may be equipped with Kirin 670 processor while the Huawei Honor 9 uses the Kirin 960 processor. What’ s more, there may be 6 + 256GB space combination version that the users do not need to worry about the space is not enough.

As for the Huawei Honor Magic 2, it is said that it continue the design of the beautiful octahedral which has earn much attention on it. How about the other details? Magic 2 is expected to be equipped with Kirin 960 like the Huawei P10 with 6 + 64GB space.It is also said that there is much possible that the Magic 2 will aiso equipped with the Kirin 970 processor like the Huawei P11. In addition, the charging speed will be quicker than the previous generation, and the battery capacity is expected to increase.