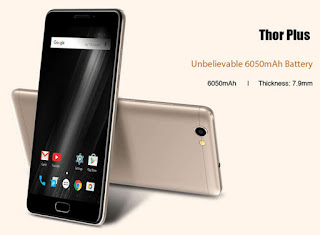 Vernee mobile phone from Shenzhen, and this year it has exhibited a variety of new machines, including two products that attract attention to the endurance of the users, one of which is Vernee Thor Plus. The aircraft is equipped with a 6050mAh large capacity battery, support fast charge, appearance Design has its own characteristics.


In addition, it uses a 5.5-inch display that we can watch the movies vividly, taking pictures for the 5 million +13 million pixel combination, and equipped with the processor is MTK 6753 Octa-core while the Vernee Apollo 2 equipped with Helio X30 processor, running based on Android 7.0 custom system with dual card dual standby function that will provide us a very fast speed like the Vernee Apollo 2 Pro.

The most endurance part is that it equipped with 7.9mm slim thickness body and stylish appearance but built-in 6050mAh large battery, which support for a long time normal use that we can take it to everywhere without the worry about the power is not enough while the Vernee Mars Pro just with 3500mAh battery.