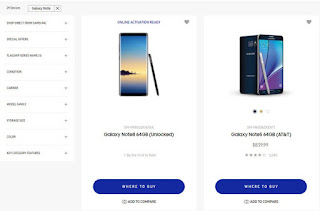 Today, the Samsung will debut the successor to the disastrous Galaxy Note 7 — the Galaxy Note 8. The latest addition to Samsung's premium phone line will show whether the company has the ability to overcome its past and secure its future.


Samsung itself has all but confirmed that the Galaxy Note 8 will come with a design that nearly matches that of the Galaxy S8 and Galaxy S8 Plus.

The Galaxy Note 8's screen should be quite large. According to most reports, the device's display will measure 6.3 inches, making it 0.1-inch bigger than the Galaxy S8+'s 6.2-inch display. The Galaxy S8 has a 5.8-inch screen.

According to a slew of reports, Samsung's Galaxy Note 8 will be the first from the company to come with a dual-lens rear-facing camera. The feature, which is available in Apple's iPhone 7 Plus, among other devices, will allow users to have more control over zooming features. It should also allow for more dynamic shots.

Our best guess is that the Galaxy Note 8 will launch sometime within the next several weeks and could cost more than the $850 Galaxy S8+.

Samsung will likely offer an unlocked version of the Galaxy Note 8 that would run on any major wireless carrier, where to buy unlocked version? It will be announced at today's conference.