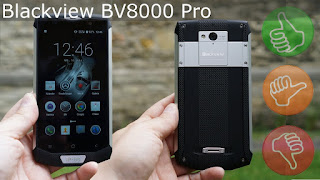 Although there is few machine equipped with the MTK6757 processor in the domestic market, there are many models has already applied it at the cross-border electricity supplier field, including the phone of the Blackview BV8000 Pro that has finally in stock after waiting for a long time, it just sale $200 in "double 11" on POMP Mall.

In addition, the camera is one of the bright points. Although it is the three anti phone, the BV8000 Pro equipped with a 16 million pixel main camera + 8 million pixel front self-timer camera that the photos will be clear and vivid.
How about the other configurations? It equipped with a 5.0 inch screen that the resolution reached the FHD level (1920 * 1080) and built in a 4180mAh battery that supports 9V / 2A fast charge with the function of the NFC that it is convenient in our daily life.

Of course, the core selling point of the Blackview BV8000 Pro is the protective. It is a triple-defense mobile phone that supports the IP68 standard. The bottom of the screen does place a metal name plate bearing the striking "IP68" text, which means that the machine can not only prevent shock Dustproof, but also supports underwater soaking, which is the reason for attracting many customers instead of the Blackview S8.