Huawei Honor V10 with 18:9 screen ratio will release on December 12 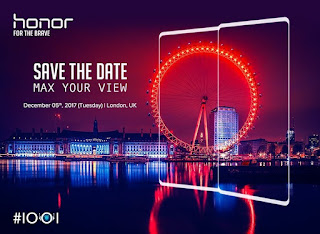 For the popular of the full screen design that the Huawei has prepared several new machines that contains high, medium and low three ranks to release in order to attract more customers to get a great sell result. It is said that the new machine of the Huawei Honor V10 will release in United Kindom on December 5.


What makes the fans of the Huawei excited at domestic is that it is said that the Honor V10 will also release at domestic on December 12 with the price of 2999 yuan at least, and the highest price is 3299 yuan that the price is similar to the Huawei Nova 3, which will be about a week later after it released at abroad.

The latest news shows that the Honor V10 is equipped with a 5.99-inch 18: 9 full screen that the overall shape is similar to the Huawei Mate 10 Pro, and equipped with Kirin 970 processor +standard 6GB RAM. The difference between the low and high version is that one with the body storage is 64GB, while the other is 128GB.

In addition, Honor V10 runs on the basis of the EMUI 6.0 system which based on Android 8.0 with the same dual rear camera as the Huawei Mate 10, that is 16 MP +20MP dual rear camera with 4000mAh capacity battery built in the body that equipped with 22.5w Super fast charge. Comparing to the phones mentioned above, which one you like best?