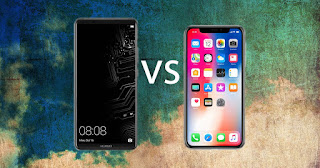 Huawei Mate 10 Pro as a representative of the Mate 10 series phone that it is not only the one range into the 4000 yuan market domestic phone, but also the one that can compatible to the series of the iPhone and the Galaxy mobile phone while the iPhone X also earned much high reputation from others. How about the performance between them?


iPhone X equipped with a 2716 mAh battery while the Mate 10 Pro featured with a 4000mAh battery that is the same as the Huawei Mate 10 that it will keep working for a longer time than the iPhone X after the test that the consume of the power that the later will cost more when use it do the same thing with the same time whatever playing the games or watching movies.

As for the temperature, after play the game for half an hour that the Mate 10 Pro shows 30 degrees while the iPhone reachs up to 38 degrees that it can easy feel that the machine is much hot, which I believe that the new flagship of the Huawei Honor V10 will also can not reach to this temperature.

Last but not the least, iPhone X still comes with a constant standard 5V/1A (5W) charging head, and compared to the Huawei Mate 10 Pro with the standard 5V/4.5A (22.5W) charging head that the former is too slow to charge it full. According to the information leaked on the internet that it takes no more than 2 hours to charge the Mate 10 Pro full while the iPhone X needs more than 2 hours that it is said that the time spends on the iPhone X will also more than the time takes on the machine of the Huawei Nova 3.

In my opinion that the performance of the iPhone X is not as excellent as we expected with the much expensive price although it equipped with some advantages to some degree. Comparing to the aspects above, which one you like? The iPhone X or the Huawei Mate 10 Pro or the next flagship of the Huawei P11 instead?