OnePlus 5T will release on November 16 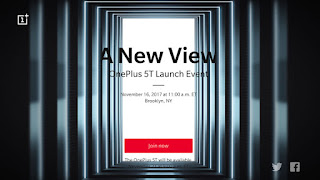 According to the news come from the Gizok that the brand of the OnePlus with the theme of "Only true flagship" will release its another new machine of the OnePlus 5T, which is said to be equipped with the full screen design, will release in Brooklyn, New York on November 16 at 11 clock, which is equal to Beijing time at 0:00 on the 17th.


It is said that the press conference for the first time adopted the way of booking that the individual fans from November 8 can purchase tickets with the price of 40 US dollars. In addition, the official announced that sales for North American and European markets start on the 21st include the users in India, and the official sales is November 28 that it is the latest in China that need to wait until December 1, which sounds that it is more popular than the phone of the OnePlus 5.

From the information on the internet we know that this one with the theme of “Anew View” that shows the full screen design that has never applied on the phone of the OnePlus 3T, and the logo remains on the back side of it with the metal body.

What’s more, the 5T upgrades to 6 inches 2160x1080P 18: 9 screen, and the fingerprint placed on the back side that may not be excellent for some people who like the fingerprint on the front side. It equipped with Snapdragon 835 processor like the Xiaomi Mi MIX 2 + 8GB RAM that the operate speed will be amazing. At the same time that the front camera upgrade to 20 million, and the dual rear camera is 16 million +2000 million pixels.