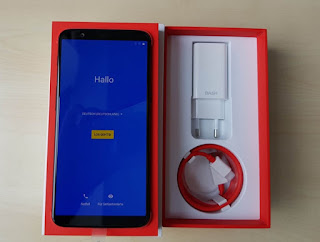 After the exposed picture of the opening box of the OnePlus 5T that there is the fans share the detail information of it on the internet that looks beautiful and unforgettable.


As for the phone for review that the official of the OnePlus gave several phone cases directly, and what makes us impressive on the appeaance is that it is the first time for it to use the circular fingerprint hole on the back side that is the same as the Xiaomi Mi MIX 2 with the post-fingerprint.

The Home key has been cancel on the front side that is equipped with the design of the 18:9 screen ratio that is the same as the Huawei Mate 10. From the specification we know that it is equipped with the Samsung's Optic AMOLED display with a resolution of 1080x2160 that the photos taken by it will be clear and beautiful to record the moments in daily life.

Comparing to the OnePlus 5, its forehead and chin has reduced about 50% that the experience of playing games will be excellent as the Huawei Mate 10. The back side is still equipped with the metal material placed 16 MP IMX 398 +20 MP IMX376K, whose aperture both is F/1.7. Photo UI has been adjusted to support professional mode and snap (double-click the power button), but it seems that there is still no OIS optical image stabilization.

It is reported that the OnePlus 5T will be starting sell at Beijing time 0 o'clock on the 17th, the domestic version will release on the 28th with the price of 2999 yuan for the 6 +64 GB version that the price is not much expensive than the Huawei Honor V10.