Ulefone Armor 2 support IP68 ready to send out on Pompmall 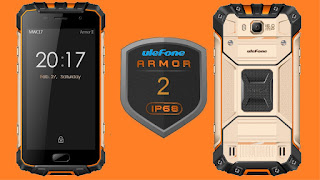 
There is a comment that they are the clone for each other between the Ulefone Armor 2 and the Blackview BV8000 Pro that although there are several differences for them, it is difficult to distinguish them from each other while both of them provide the gold and grey version for the customers to choose.

As for its detail information, it is equipped with Helio P25 Octa Core processor, builds in 6GB RAM + 64GB ROM that is enough for normal usage with 5.0inch 1080*1920 pixels HD screen that is a little smaller than the Ulefone T1 on the basis of the Android 7.0 OS.

13.0MP front camera plus 16.0MP rear camera for the customers to record every happy moment clearly like the phone of the Ulefone Power 2 with the built in 4700mAh battery while the DOOGEE S60 equipped with a 5580 mAh battery that we can bring it to the place without worry. It is ready to send to you, scratching this chance without hesitation on Pompmall.