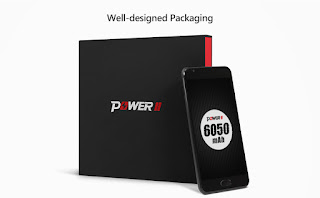 After the listing of the Ulefone that it really produced a lot of cost-effective productd in foreign market, and the series of products follow up on the line take into account the popularity of people with the reasonable price, but also begin to strengthen competitiveness, including the features like the fingerprint and the big battery etc. like the phone of the Ulefone Power 2.

It equipped with several features that one of the features is that it has the special TF card slot that supports the memory extend to 256 GB while the other phones like the Ulefone T1 Premium Edition supports the 256GB TF card, but the TF card slot is shared with the SIM card that is not convenient in daily life.

Another important feature is that it built in a 6050 mAh big battery that support standby for several days, which is convenient for us to bring it to everywhere that we do not need to worry the power is not enough while the phone of the Ulefone MIX just built in a 4000mAh battery.

How about the other information? It is common like many other phones that it is equipped with MT6750T Octa core processor with 4+64GB memory combination, 5.5 inches screen on the basis of the Android 7.0 OS that the speed will be quickly. What’s more, it equipped with 8.0 MP front camera plus 13.0MP rear camera that the picture will be beautiful like the phone of the Ulefone S8. What we want to remind last is that the Power 2 now with the special price of 179.99USD on Pompmall.