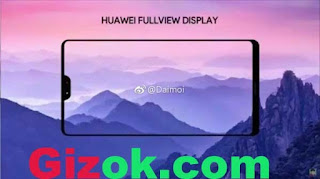 As the ending of this year that there are many new machine with full screen design, which is said to be released next year, on the way to meet with us, including the Xiaomi Mi7, Samsung S9 etc. that are equipped with the Snapdragon 845 processor with excellent performance.


Huawei as one of the leaders in domestic mobile phone market that the new machine of the Huawei P11 is under preparing and it is said to be released on February 26 next year that is the same time as the release time of the last generation with the main theme of the camera and AI Artificial Intelligence.

Recently, there is a picture exposed in the internet that is said to be the picture about the P11 with the words of Huawei Fullview Display that the design is very unique that it looks like the design of the iPhone X on the upper top while there is some space left at the bottom that the design is different from the Huawei Mate 10.

It is said that the Huawei P11 with the main sell points of 40 million pixels of three Leica rear camera and 24 million pixel Selfie that the camera performance is better than the Huawei Honor V10. What’s more, it will equip with the Kirin 970 processor while the Huawei Nova 2s is equipped with Kirin 960 processor with richer AI application scenarios in order to improve the using experience.