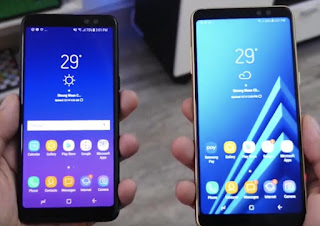 It is well known Samsung has two exciting new Galaxy smartphones coming soon: the (controversial) Galaxy S9 and a potentially game changing Galaxy X. But new leaks have confirmed there is a third upcoming Samsung smartphone which may just prove more impressive.


New smartphones so interesting is Samsung has combined the cutting edge designs of the Galaxy S8 and Galaxy S8 Plus with premium specifications yet will sell both at midrange prices.

SamMobile’s first leak confirms the Galaxy A8 Plus specs. It will offer Galaxy S8-beating levels of RAM with 4GB and 6GB variants available and up to 64GB of internal storage. There are dual 16MP rear cameras and even dual front facing cameras. Running the show is Samsung’s octa-core Exynos 7885 chipset with support for Bluetooth 5.0. The phone will also have a 6-inch OLED display running at 1080p (the default resolution for both the Galaxy S8 and Galaxy Note 8) and it also matches or beats Samsung’s most expensive smartphones by packing a 3500 mAh battery.

These look like red hot midrange smartphones and they arrive at a time when the ever increasing prices of flagship models is starting to alienate users. Of course the Galaxy A8 and Galaxy A8 Plus could cannibalise sales of Samsung’s Galaxy S9 and Galaxy S9 Plus, but then again if it also makes a dent in iPhone sales I’m sure that’s a price Samsung will consider well worth paying.