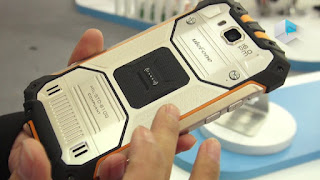 
The Ulefone Armor 2 achieves IP68 by adding a waterproofing membrane to the necessary voids, and it is made up of two layers of polycarbonate and TPU, while the screen uses a third-generation gorilla Glass that the phone has a good anti-drop effect. In addition, Ulefone Armor 2 can be applied to -20 ℃ to 80 ℃ ambient temperature range while the other phones like the Ulefone MIX 2 will with many issues under such environment.

Unlike the last generation that this time the Armor 2 placed the logo on the back side like many phones such as the Ulefone MIX with a 5.0 inches screen that is convenient to carry it to everywhere on the basis of the Android 7.0 system.

Except the feature of IP68, it also provides the wonderful performance in daily usage. It is equipped with Helio P25 processor plus the 6+64 GB memory combination that is much bigger than the phone of the Ulefone S8 that the operate speed will be amazing that you will like it after using for a while.