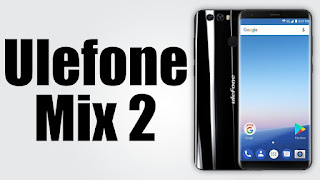 It is common in the mobile market that there is one or several models release in every day, for there are so many manufacturers that we can not remember them in detail. According to the information come from the Pompmall that the brand of the Ulefone exposed its new machine—Ulefone Mix 2.


It is equipped with the MT6737 Octa Core processor with a 5.7 inch screen that the resolution is 1440*720 pixels. Although it is a little low compared to the phone of the Ulefone T1 Premium Edition, which equipped with the 1920*1080 pixels, it will give us a comfortable watching feeling when using it.

As for other information, it uses a 5.0MP front camera plus 13.0MP+ 5.0 MP dual rear camera that the pictures will looks colorful and clear that is the same as the Ulefone S8 on the basis of the 3300 mAh battery that we do not need to charge it every day for normal usage.

Above all, the equipments applied on it are not very high for it also with the reasonable price that everyone can afford it. When it will be released? We have not got the certain time from the official, but we promise that it will not let us to wait for a long time like the Ulefone Armor 2.