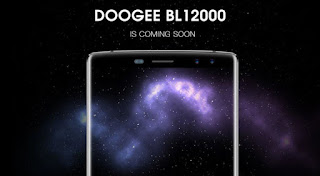 DOOGEE has released several new machine in the last year, and several models have get a great sell result such as the phone of the DOOGEE MIX that is said to be the clone of the Xiaomi Mi MIX, but the former has its own characters that it is very popular in the foreign market.


At the beginning of the New Year that there are much news said there are several new machine of the DOOGEE that is on the way to meet with us, and the one of them is the DOOGEE BL12000 that is equipped with a big battery that the capacity is 12000 mAh, which is the same as the name.

The battery is said to be the largest one in the Smartphone area that has also equipped with the phone of the DOOGEE BL12000 Pro that we do not need to worry the power is always not enough especially when we go out with the fast charge function, which will bring us much convenience.

What’s more, it is equipped with its own design style with the help of the 6.0 inch FHD full screen that the screen ratio is 18:9. In addition, both the front and the back side are equipped with dual camera, including the 8.0MP+16MP front camera plus 16MP+13MP back camera that the pictures will be clear and beautiful like the phone of the DOOGEE MIX 2.

Hardware, DOOGEE BL12000 configured Octa-core Mediatek MT6750T processor with 4GB + 32GB memory combination that supports up to 256GB TF card, and it is equipped with fingerprint recognition, face wake technology on the basis of Android 7 Nougat system that is the same as the Homtom S9 Plus.