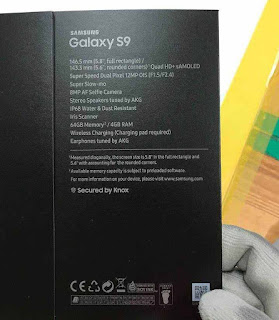 Tech informant Evan Blass claims to have learned from a C-level executive at a smartphone case maker that the Samsung Galaxy S9 and larger Galaxy S9 Plus will be available for pre-order starting March 1, and will go on sale March 16.


This makes Blass' claim of a March release for the Galaxy S9 quite plausible. The schedule is very similar to how Samsung has released smartphones in the past: The Galaxy S8 was delayed until April 2017 due to safety concerns, but the Galaxy S7 was announced in late-February and released in mid-March of 2016, as were several older devices in the Galaxy-S series.

By all accounts, the Galaxy S9 and S9 Plus will be evolutionary products in Samsung’s portfolio. It will fix several of the mistakes from the GS8 family without taking any big risks, and why would it? Samsung’s strategy is working wonders as it continues selling huge numbers of phones while rivals like LG struggle even to justify having a smartphone division. The GS9 should shift the fingerprint sensor lower on the back of the phone to make it more accessible, and the bezels will slim down even more. There should also be stereo speakers and possibly a dual camera setup on the Plus variant.

Samsung also recently released the Galaxy A8 smartphone, which includes a dual-lens front-facing camera that made us wonder if the Galaxy S9 could have such a feature. However, it appears dual-camera set may be exclusive to the rear camera on the larger Galaxy S9+.