Samsung Galaxy S9 will be launched on February 25 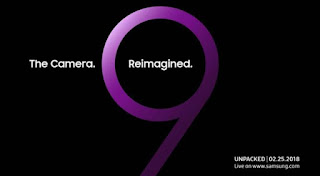 The flagship phone launch of Mobile World Congress 2018, the Samsung Galaxy S9 is going to set the agenda for Android phones in 2018. Rumors are already beginning to fly about the Galaxy S9's design and features, and we're rounding them up in preparation for the phone's launch on the evening of February 26 in Barcelona. We don’t know a lot about the device, but Samsung’s event invitation offers at least one tantalizing teaser.


The invitation to Samsung’s Unpacked event simply shows a “9” on a black background with the phrase “The camera. Reimagined.” This lends some credibility to the rumor that Samsung will focus on camera performance with the Galaxy S9. The Galaxy S8 made little in the way of camera improvements over the Galaxy S7. Although, the Galaxy Note 8 added a secondary camera for 2x zoom photos and an improved portrait mode.

So the Galaxy S9 will probably be to the Galaxy S8 Plus as...well, as the iPhone 8 is to the iPhone 7. But Samsung could very well have a surprise up its sleeve, especially in the area of software, which is the thing that leaks least often with these kinds of devices.

Samsung's event invite says the phone will have new camera capabilities. According to ET News, the Galaxy S9 will have a f/1.5, 12-megapixel camera with OIS, and the Galaxy S9 Plus will have dual f/1.5 and f/2.4 12-megapixel cameras. Rumors cited by The Inquirer say the S9's camera sensor will record 1080p video at up to 480 frames per second, and will also have faster autofocus speeds.

Whatever Samsung shows off at Mobile World Congress, it’s likely to be the top-selling Android phone until the Galaxy Note 9 comes out later in 2018.