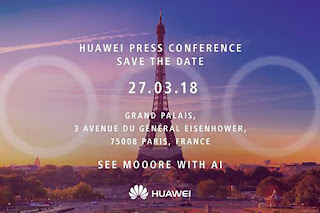 The Huawei P20 is slated to launch in March and, while recent leaks have focused on its iPhone X-esque notch, Huawei’s official invite might have outed its big distinguishing feature: a whopping three rear-facing cameras.


Although the company will attend the mobile trade show later this month, it has decided to host its own press event just one month later, on 27 March, in Paris. Huawei has sent invites to the media, asking them to "see mooore with AI". The invite itself shows the Eiffel tower super-imposed with three large "O" symbols. These Os are also obviously played up in the company's spelling of "mooore".

So, what does all this teasing mean? Huawei clearly has some sort of AI-related announcement, but let's not forget Huawei's upcoming flagship range is expected to be updated soon with at least three new devices named Huawei P20, the Huawei P20 Plus, and the Huawei P20 Pro. And the primary phone, the P20, is thought to be iPhone X-looking with a triple-lens camera on the rear.

Huawei already has solid footing in the mobile photography department, though it doesn’t quite stack up to the Google Pixel 2, Samsung Galaxy S8 or iPhone X. Adding a third lens to the mix might not be the move to take the company beyond Sricam camera, but if its AI can take on a bit more of the processing slack, the P20 might be the formidable phone to beat in 2018.