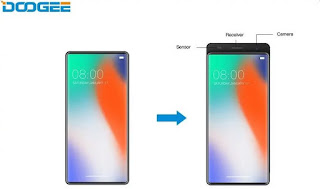 The tech enthusiasts are eagerly waiting for the upcoming MWC 2018, which is scheduled to be held in Barcelona from February 25 to 28. Doogee Mobile, a popular smartphone manufacturer based in China is also gearing up to showcase their next-generation devices at the event. The company has announced that they will unveil Doogee MIX 3, MIX 4 and Doogee V in Barcelona. We have inside information about the features that will be included with these handsets.


Dubbed as an eye-catchy futuristic smartphone, the upcoming Doogee MIX 3 and MIX 4 will be integrated with an in-display fingerprint, sliding screen, and rotatable camera. The main highlight of the Doogee MIX 3 will be the addition of a rotatable camera with the ability to combines the front camera and rear camera into one.

According to the company sources, the MIX 3 will be able to produce and deliver clearer, crisp and sharper images because of an enhanced and concentrated camera. You will be able to control the direction of the lens with the help of the rotatable holder. Hence, it is possible to capture images in various angles. The company released few renders grabbed from the production hub and it reveals a concave designation, which was usually reserved for the fingerprint sensor. It is possible to unlock the smartphone as soon as you grip it because the sensor is located at the side edge of the device.

The upcoming Doogee MIX 4 will ship with an innovative sliding screen, which is placed on the placed on the entire front surface of the smartphone, without a notch or chin. According to sources, the Doogee MIX 4 will be equipped with the largest screen to body ratio, which is achieved by hiding the front camera, sensor and the receiver towards the middle. You will be able to view the hidden screen if you stretch the display out.

In addition to DMIX 3 and MIX 4, the company will also showcase Doogee V. The main attraction of the Doogee V is the addition of an in-display fingerprint sensor using which you can unlock the phone creatively. The intention of this mechanism is to enhance the body screen ratio. The device will ship with an AMOLED full display, which not only renders sharp images but also consumes fewer resources.

Doogee has confirmed the participation at the MWC 2018 and the above smartphones will be showcased to provide users a chance to experience the functionality. We will provide you with updates. Stay tuned.