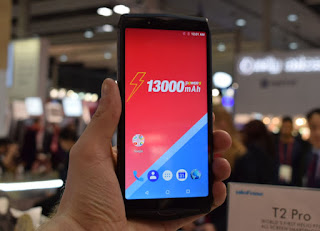 Like most smartphone makers, Ulefone mobile is in attendance at MWC 2018 and showcasing a number of its smartphones, including a new one the company is formally introducing at the event. This is the Ulefone T2 Pro.


Firstly, Ulefone is positioning this as the first smartphone to come powered by a MediaTek Helio P70 processor. Although what is more likely to catch people’s immediate attention is the actual design of the phone, and in particular the front panel. Ulefone has managed to achieve this by not only including a true edge-to-edge design, but also a notch-like cut-in on the top portion designed to accommodate the front-facing camera and not much else. The design overall results in a highly attractive smartphone and certainly one which looks to offer as much screen real estate as possible.

This would not be a “Power” branded phone if battery life was not one of its main features and on that note the Ulefone Power 5 is unlikely to disappoint. As the capacity on offer here comes in at a staggering 13,000mAh. Likely making this a phone which can stay powered for hours on end, if not days. In spite of its less than stylish design this is a phone designed to compete with even the most premium of rugged phones, as not only does it pack in 6GB RAM and 64GB storage but it also includes a dual camera setup on the front, as well as another dual camera setup on the back. On a last note, while this is not the sleekest of looking phones it is one which utilizes an 18:9 aspect ratio and so it does feel taller and thinner than most current rugged phones.

To sum up, those looking for a smartphone with four cameras, a seriously rugged build, and an even more serious battery capacity, will likely want to keep an eye out for the Ulefone Power 5 and Ulefone Power 3S.