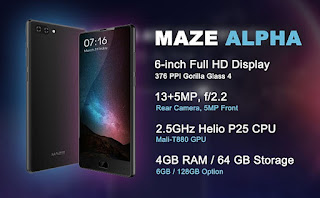 MAZE Alpha was one of the first Xiaomi Mi MIX 2S-inspired smartphones that was made available, and this handset is now discounted on Mazephone.com. The MAZE Alpha can now be purchased for $189.99, for those of you who are interested, and you don’t even need to utilize a coupon code or anything of the sort.


This handset also comes with a dual camera setup on the back, and next to those two cameras, the phone’s LED flash is located. The MAZE Phone logo is included on the back of the phone as well, while all of the device’s physical keys are included on the right. In terms of specs, the MAZE Alpha is not a slouch either, the device sports a 6-inch fullHD (1920 x 1080) display with Corning’s Gorilla Glass 4 protection, while you’ll also get 4GB of RAM and 64GB of expandable native storage here. MediaTek’s Helio P25 64-bit octa-core processor fuels this smartphone, while Android 7.0 Nougat comes pre-installed on the phone.

13 and 5-megapixel shooters are included on the back of the device, while a single 5-megapixel camera can be found on this MAZE Alpha X phone’s front side. This handset also sports two SIM card slots, and we’re looking at two nano SIM card slots here. The device does come with a 3.5mm headphone jack, while Bluetooth 4.1 is also included, in case you need it.