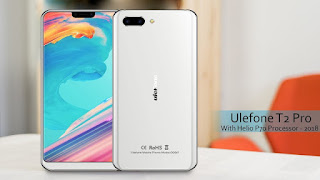 The manufacturer come from Shenzhen has released its new machine of the Ulefone T2 Pro on the MWC 2018, which has gather several popular selling points that just from the design it is more beautiful than the iPhone X and earned much expectation to get and enjoy it.


The T2 Pro is equipped with the“special-shaped full-screen” design that is believed to be the next fashion design feature, which with the same vision feeling as the previous “borderless” model, and the chin part of this phone is very narrow that looks more beautiful than the phone of the Ulefone Power 5.

In addition, the equipped functions are very tempting, including the full screen design that the screen ratio ups to 19:9, screen fingerprint technology and the function of face wake up that has not applied on the other phones such as the Ulefone Armor 3 and the Ulefone Armor 2S.

As for the detail information, it is equipped with Helio P70 processor that contain four A73 large cores and four A53 small cores which was designed on the basis of the TSMC's 12nm process while it is said that the Ulefone X is equipped with MT6763 Octa core processor that will bring us the amazing and unforgettable running speed. Then the question is coming, if it will be sold at domestic mobile market, will you consider buying one?