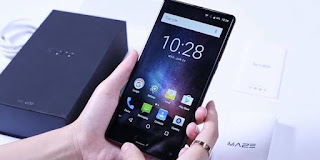 The Maze Alpha Android phone reminds me strongly of the Doogee Mix 3 I reviewed earlier this year. It has a similar look and feel out of the box, and both have bezel-less screens and run Android. But there are some subtle differences in the Maze Alpha that are not immediately apparent.

Inside the phone the CPU is a MediaTek Helio P25 (MT6757) with eight cores. Four ARM Cortex-A53 run at 2.5GHz and four at 1.4GHz. Graphics are powered by a ARM Mali-T880 MP2 900MHz processor, which Maze says gives 25 percent better performance to previous-generation chips.

Unlike Meizu and Doogee, the Alpha runs stock Android 7.0 as the OS with no manufacturer-specific additions or tweaks. Model options are 4GB or 6GB memory with 64GB storage.

There are dual Samsung S5K3L8 sensors for the rear cameras, which are 13 megapixel and 5 megapixel, and there is a 5-megapixel camera at the front. And, like the Doogee Mix 3, when taking a selfie, you need to turn the phone upside down to get the best image, as the camera is at the bottom of the screen.

The phone supports two nano SIMs -- one slot can be used for an expansion SD card up to 256GB. It has an audio jack and a USB C port.

For under $200, the Maze Alpha is a nice-looking, large-screen phone that can be used for work and home, and, with a large battery, it will last you through the whole day.

The UI is nothing special -- and I could find no fancy features from the manufacturer worth a mention. It is so similar to the Doogee suite of phones, but with fewer features. The Alpha is very much like a Doogee clone. Even the somatosensory feature appears as standard on the Doogee MIX 4.

I struggled to find any further differentiating features worth calling out. However, the Maze Alpha X is a no-nonsense, solid, and affordable phone with a fabulous sized screen and a good quality camera. And, for less than $200, you can't really go wrong with it.