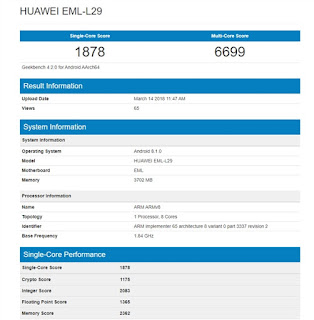 There is just about ten days left for the release conference of the new flagship—Huawei P20, which is said to release on March 27 with the code number of Emily or EML-L29 that has appear on the Geekbench running score website, and it is the first time for us to know its performance in detail from the aspect of running score.


From the pictures leaked on the internet we know that it is equipped with the Kirin 970 processor that has improved a lot on the basis of the Kirin 960, which is the same as the phone of the Huawei Mate 10 who has already earned a high reputation before its release with the help of the popular full screen design. In addition, its single-core score is 1878 and the muiti-core score is 6699 that is said to be the close number of the next new machine of the Huawei Honor 10 for up to now that the information spread on the internet that the later version will also applied the same processor, which has not confirmed by the official.

It is reported that the P20 uses a 5.7 inch screen that looks like the design of the iPhone X with the contribution of the dual rear cameras and the 3320 mAh unmovable battery while the Huawei P20 Pro is equipped with the screen increased to 6.0 inch plus the three back cameras and 4000 mAh battery that is the same as the Huawei Mate 11 that will provide an amazing and wonderful using experience.

As for the Huawei P20 Lite, it is said that it is featured with a 5.84 inch screen with the help of the Kirin 659 processor on the basis of the Android 8.0 that the fingerprint was placed on the back side. Although it can not be compatible to the P20 and the P20 Pro, it still will bring us an unforgettable running speed. Last but not a least, except the P20 series will release on that day, the new machine of the Xiaomi Mi MIX 2S will also meet with us. More information please pay attention to us.