Maze Alpha X is an even better bargain now 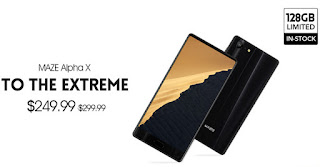 Maze is still a fairly young brand in the smartphone world, but the manufacturer came out swinging. Its first entry was the Maze Alpha — a bezel-less phone (with a chin), which came out just as the new trend was picking up, and before most manufacturers caught up. Five months later, the company refined the design by upgrading it with the new 1:2 display aspect ratio and slimming out the chin a bit more — the new handset was called the Maze Alpha X. Now, Maze would like to kick off the new year with some discounts, so you can get its bang-for-the-buck devices at an even lower price!

There are more deals to be found on the Maze Phone website — the original Maze Alpha is down to $149.99 and a luxurious, leather-clad Maze Comet is down to $139.99.