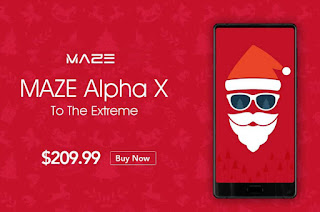 If you’re interested in the MAZE Alpha X, you’re in luck, as the phone is now available for purchase on Mazephone.com.


The MAZE Alpha sports really thin bezels on the sides and above its display, though it has that ‘chin’ below the display which is not particularly thin, but it’s necessary to keep those side and top bezels so thin. The MAZE Alpha is made out of metal and glass, it sports a front-facing fingerprint scanner, and all of its physical keys are placed on the right.

The device is fueled by the Helio P25 64-bit octa-core processor, while it sports a 6-inch fullHD+ (2160 x 1080) InCell display. The phone also comes with 6GB of LPDDR4X RAM, and either 64GB or 128GB of native storage. A 3,900mAh non-removable battery is also included in this package, and it’s also worth saying that MAZE included Corning’s Gorilla Glass 5 protection on the front side of the phone, while you’ll find Gorilla Glass 4 on the back.