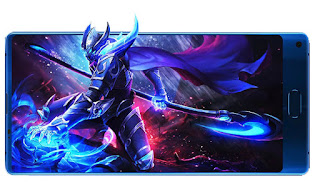 Xiaomi was formerly known as a classic Chinese copycat. That changed with the launch of the Xiaomi Mi Mix. The device impressed at the end of 2016 with thin screen edges and high-end specifications. Suddenly the big brand was a trendsetter. Great (Western) manufacturers soon followed. Meet the Maze Alpha X.


Let's start with the screen. The Maze Alpha X has a 6-inch FullHD + screen at the front, with a fingerprint scanner and a selfie camera underneath. That takes some getting used to, so you suddenly take pictures from a different angle. The positioning of the fingerprint scanner works well, although it does provide a thicker screen edge. Maze Alpha has moved the scanner to the back.

The 6.0-inch screen is more than adequate with a pixel density of 402 PPI and its FullHD + resolution. Especially indoors you will not regret it. In sunlight or directly under a lamp, it is noticeable that it is not the best panel on the market. Anyway, we did not expect that for 199 euros either.

There you will find the MediaTek Helio P25. In combination with 64GB / 128GB of storage memory and no less than 6GB of RAM. Nice bonus: the storage memory can be expanded with a Micro-SD card. That means decent specifications, and more than enough for almost every user.

A hefty 3900 mAh battery completes the picture. Thanks to MediaTek's own Pump Express feature, the Maze can also be charged extra quickly. During our use, the device easily lasted a day and a half, which is a great achievement.