OUKITEL U18: iPhone X clone and comes priced under $180 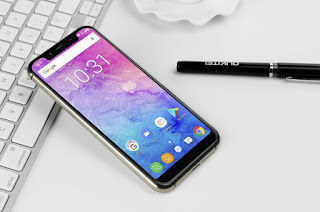 Oukitel has been producing handsets for quite some time but was better known for its smartphones with large batteries and rugged exteriors. That all changed last month when it announced something more elegant, the U18. The U18 offers a design that mimics Apple's iPhone X and comes priced under $180.


As for the actual specs, the OUKITEL U18 features a 5.85-inch display along with a 21:9 aspect ratio resulting in a 1512 x 720 resolution. Inside, the OUKITEL U18 comes loaded with 4GB RAM, 64GB storage, and is powered by a MediaTek MT6750T octa-core processor. The dual rear camera setup is comprised of a 16-megapixel (interpolated) primary camera along with a 5-megapixel secondary camera, while the front of the device houses a 13-megapixel (interpolated) camera.

Additional features include a rear-positioned fingerprint sensor, facial recognition (“Face ID”) software, a 4,000 mAh battery, and Android 7.0 (Nougat). As for the price, to celebrate the launch of the new color option OUKITEL has dropped the price of the U18 and Oukitel U19 down to only $159 marking the lowest price this phone has been on sale for since its initial release.

What is probably most impressive about this phone is its price. The device retails for $179.99 and just last month was discounted to $159.99 for a limited time. You can buy on the official website: https://www.oukitel-store.com/oukitel-u18.html