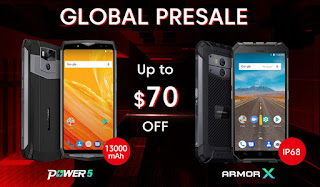 Two new Ulefone smartphones are now entering their pre-order status which should be good news for those looking for a new phone, and especially if daily battery life and/or durability matters. This is because the Ulefone Power 5 and the Ulefone Armor X are specifically designed to address these two consumer pain points with the Power 5 equipped with a high battery capacity, and the Armor X with a heightened build quality.


Boasting a mighty 13.000mAh battery, the Ulefone Power 5 grants you more than one week of energy on a single charge. To make the big battery get refilled quickly and safely, it comes with a 5V/5A super fast charger to fully charge the huge battery in merely 2.5 hours. Sporting a 6″ 18:9 all screen FHD+ display, the Power 5 delivers marvelous visual enjoyments, allowing you to enjoy more vivid and colorful images, videos, and games.

Moving on to the hardware, it is equipped with an MT6763 octa-core SoC paired with 6GB of RAM and 64GB of internal storage. A snappy enough configuration to handle all tasks easily. On the camera side, it features a Sony 21MP/5MP dual rear camera and a 13MP/5MP dual selfie shooter for high-quality photos. In addition, it comes with advanced facial recognition system, side-mounted fingerprint scanner, 10W Qi wireless charging, handy shortcut key on the side and the latest Android 8.1 Oreo. You can grab it at the discounted price on Official Ulefone Shop.

As for the Ulefone Armor X, as mentioned, this is a phone which places its emphasis on its durability due to its overall more rugged build quality and its IP68 certification. Therefore it is not only protected against the usual dust and water encounters but also various forms of impact, including drops and bangs. Adding to its built for outdoors stance the Armor X also manages to pack in a 5,500 mAh capacity battery along with 5V/2A fast charging support. Ignoring the durable selling points and the Armor X offers a decent spec list for a budget price including a 5.5-inch display along with an 18:9 aspect ratio. Inside, the Armor X comes loaded with 2GB RAM, 16GB storage, and is powered by a MediaTek MTK6739 processor. Once again, a dual rear camera setup is in effect consisting of a 13-megapixel primary camera along with an 8-megapixel secondary camera, while another 8-megapixel camera can be found on the front of the phone. Other additional features of note include a fingerprint sensor, facial recognition software, Qi wireless charging support, NFC support for mobile payments, 4G LTE support, and Android 8.1 (Oreo).

As for the pricing and availability, the pre-order period for both phones officially begins on April 24 and will remain in effect for one week – up until May 1. During this period, the Ulefone Power 5 will be available to buy for $269.99 while the Armor X will be priced at $129.99. These are limited-time prices, though, as when the phones go on general sale the Power 5 will be priced $70 higher than it currently is, while the Armor X will be priced at $179.99 – a $50 increase on its pre-order price. However, the official has not announced the price of Ulefone T2 Pro and Ulefone X.